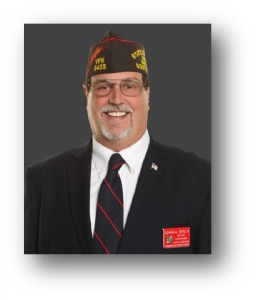 Edwin A. "Ted” Tufts II enlisted in the United States Air Force in 1975 and served 21 years as an aircraft loadmaster on the C-141A/B Starlifter assigned to Charleston AFB.

During his service, he deployed in support of several campaigns to include Operations Desert Shield/Storm in Southwest Asia. His military decorations include the Meritorious Service Medal, Aerial Achievement Medal, Armed Forces Expeditionary Medal, Southwest Asia Service Medal and the Kuwait Liberation Medal. He retired in 1996 with over 6000 hours of flight time.

After retirement, Ted was employed at the Ralph H. Johnson VA Medical Center in technical support and has spent the last 21 years working at the Medical University of South Carolina as a Systems Analyst.

Ted is a Gold Legacy Life member of the VFW, and is a life member of the VFW National Home for Children, Military Order of the Cootie and American Legion. He and his wife, Beth, who is past Auxiliary president of Post 3433 and District 1 President, reside in North Charleston, SC. They have two children and four grandchildren.